Telegram is –by far– the best messaging app, so I made a few sticker packs for it.

These BJJ sticker packs took an absolute eternity to draw! I had no idea exactly how many potential ranks there are to be had in BJJ!

I wanted to make a single sticker pack so that I could show what rank a person achieved following their promotion. I started drawing my own belt in various positions, trying to work out if I liked the roll or the fold better. I ended up shelving the idea for months before coming back to it with a fresh outlook: the simple square. Part-way through the set I found that I really liked a few other ways of illustrating the belts, so I started on those as well.

In the end, I created hundreds of belt drawings, broken into 4 packs – one for each style. I have a few more ideas, but the fact that I have to do each belt 98 times is a little daunting. Maybe I will get to it, maybe not. I have a few different ideas to try first. 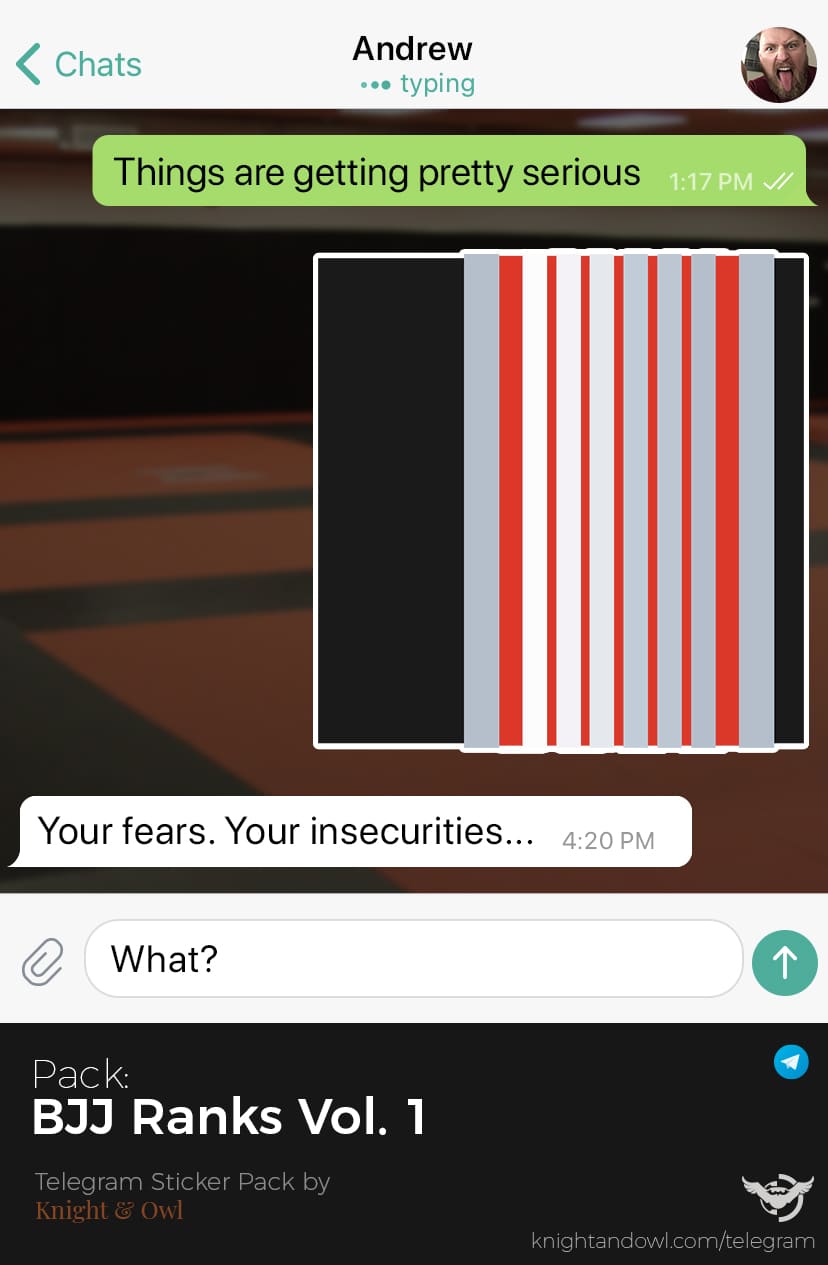 This square set came from the idea that a good logo has to work well inside of a small square area, so that you can still identify it when seen at a distance, or scaled down. 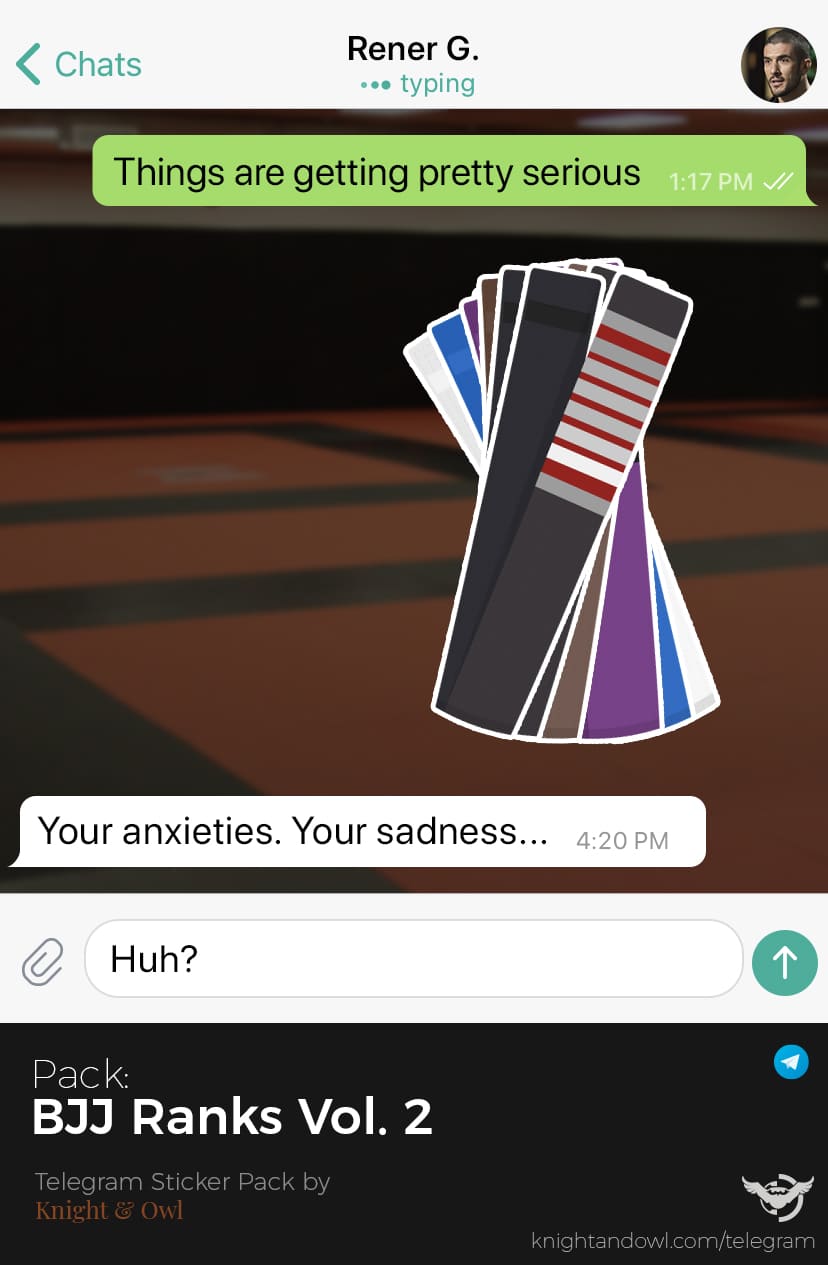 I ran into a website that sells belts and displays them like this, which looks pretty good. I drew my own version and applied it to all 98 variations.

This is the digitized version of my very first belt drawing. This one gave me the most trouble creating, so I pushed towards the end of the process. 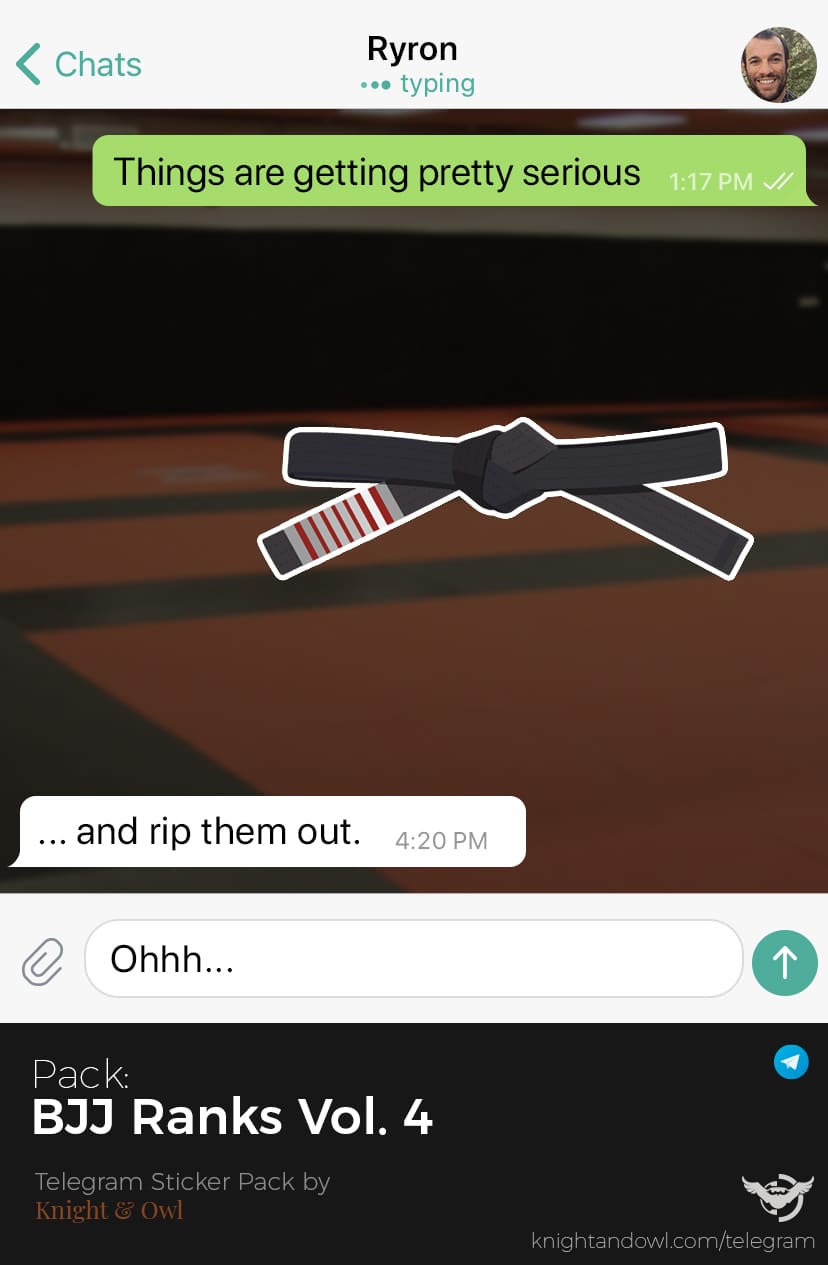 I also found this style on a belt vendor’s site and created my own drawings for this pack. The knot folds were tricky to draw and shade. I think it turned out great!

The only way to earn all of the potential ranks is to start BJJ at age 4, never quit, never take an injury that pulls you off the mats for a significant amount of time and train for a minimum of 48 years. This method would have you wearing a master’s belt at age 52, but I do not think the solid red belt is available to non-founders. I could be wrong – here’s my source: https://ibjjf.com/…/graduation-system-poster.pdf 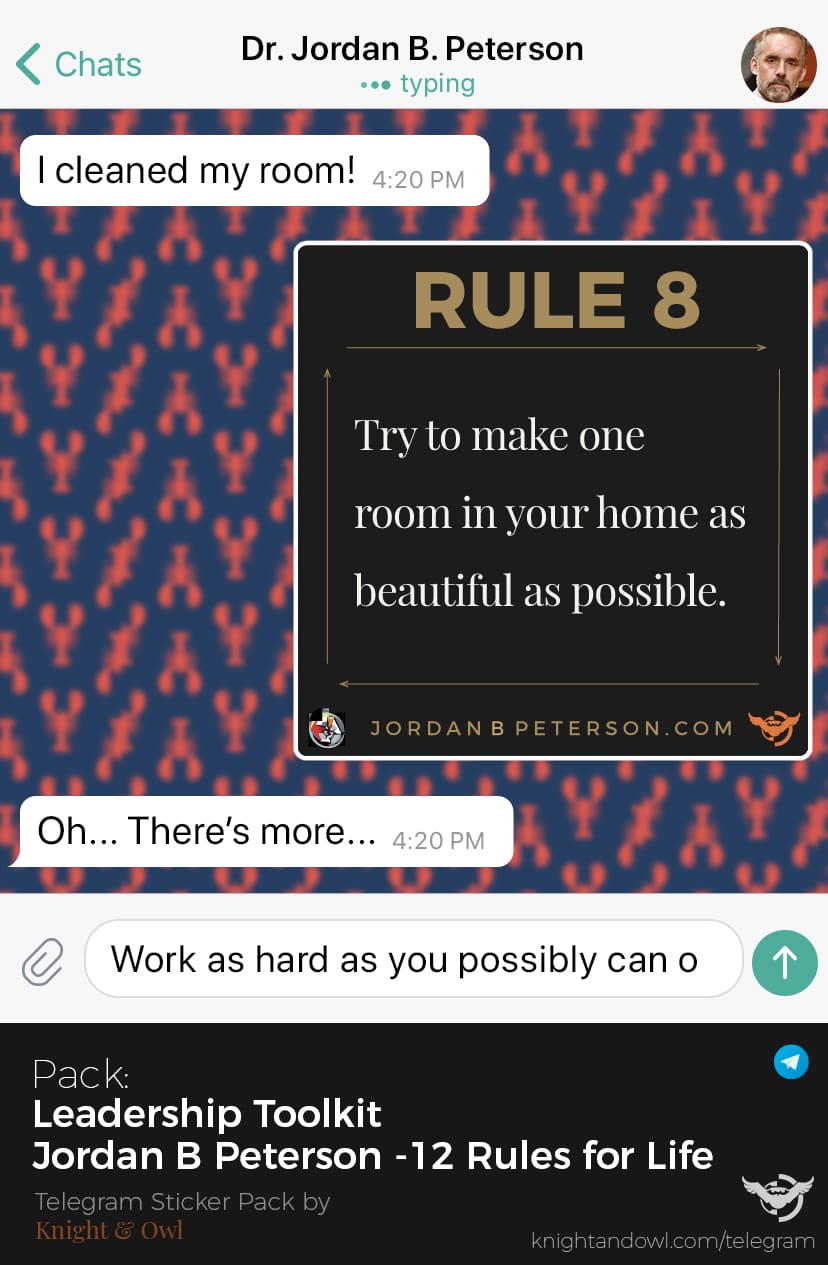 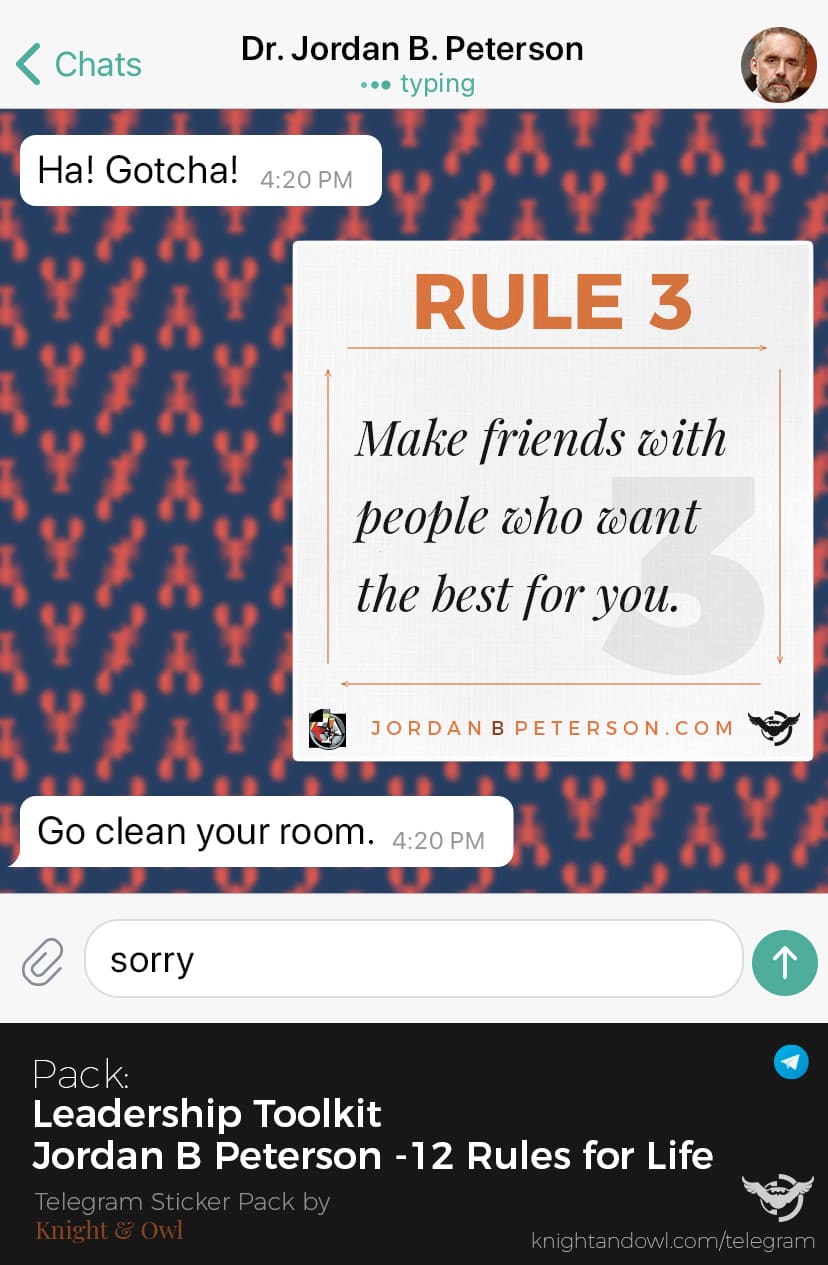 I ran into a guy named Dr. Jordan B. Peterson a few years ago. I struggled quite a bit with what he was saying for a long time because he tied a lot of the ideas to religion. But I began to understand some of it and I was hooked. When he released his 2nd book I took it upon myself to create a 12 Rules sticker pack. I use this one the most of all my packs. 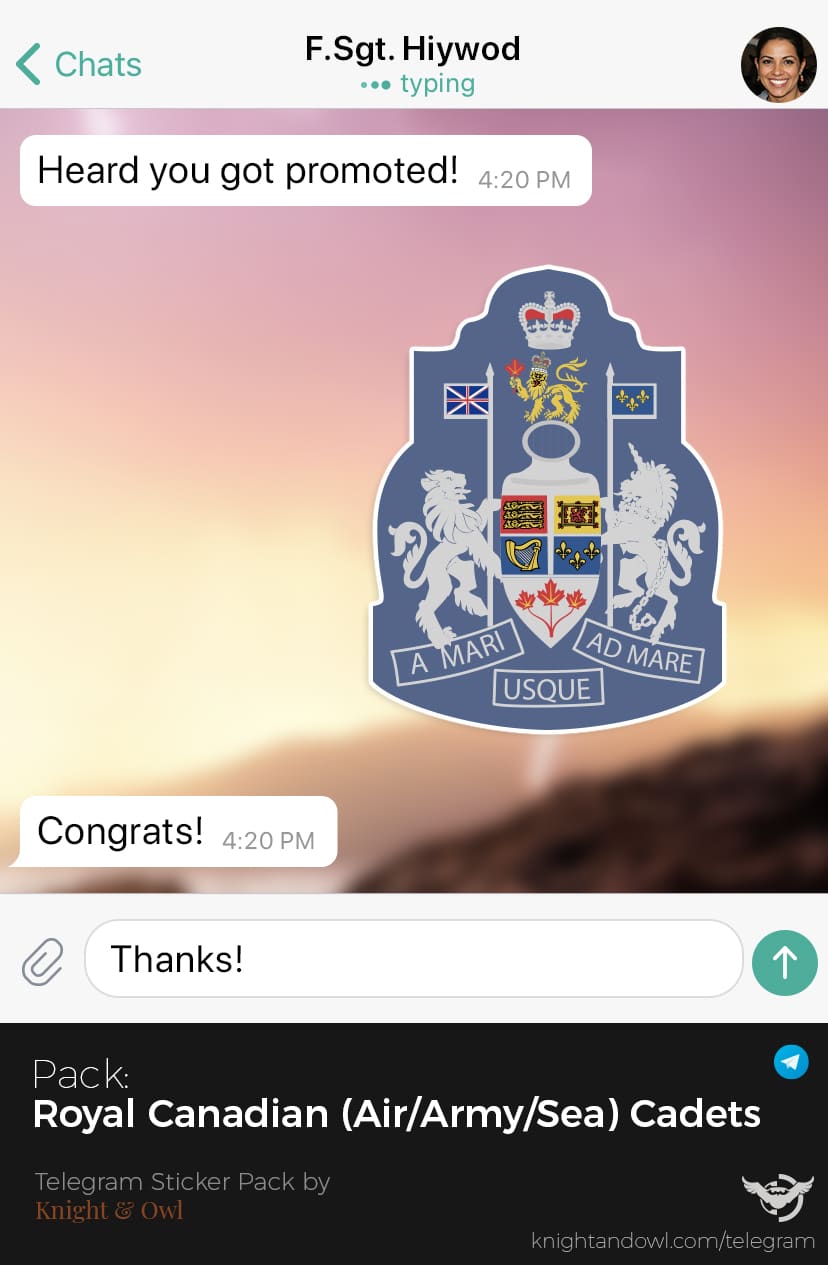 My interest in the Royal Canadian Air Cadet program motivated me to create a pack containing the ranks cadets achieve. I had a problem finding all the ranks images of similar quality, so I ended up recreating them all in Adobe Illustrator. It took quite a while, especially for the more complex ones. 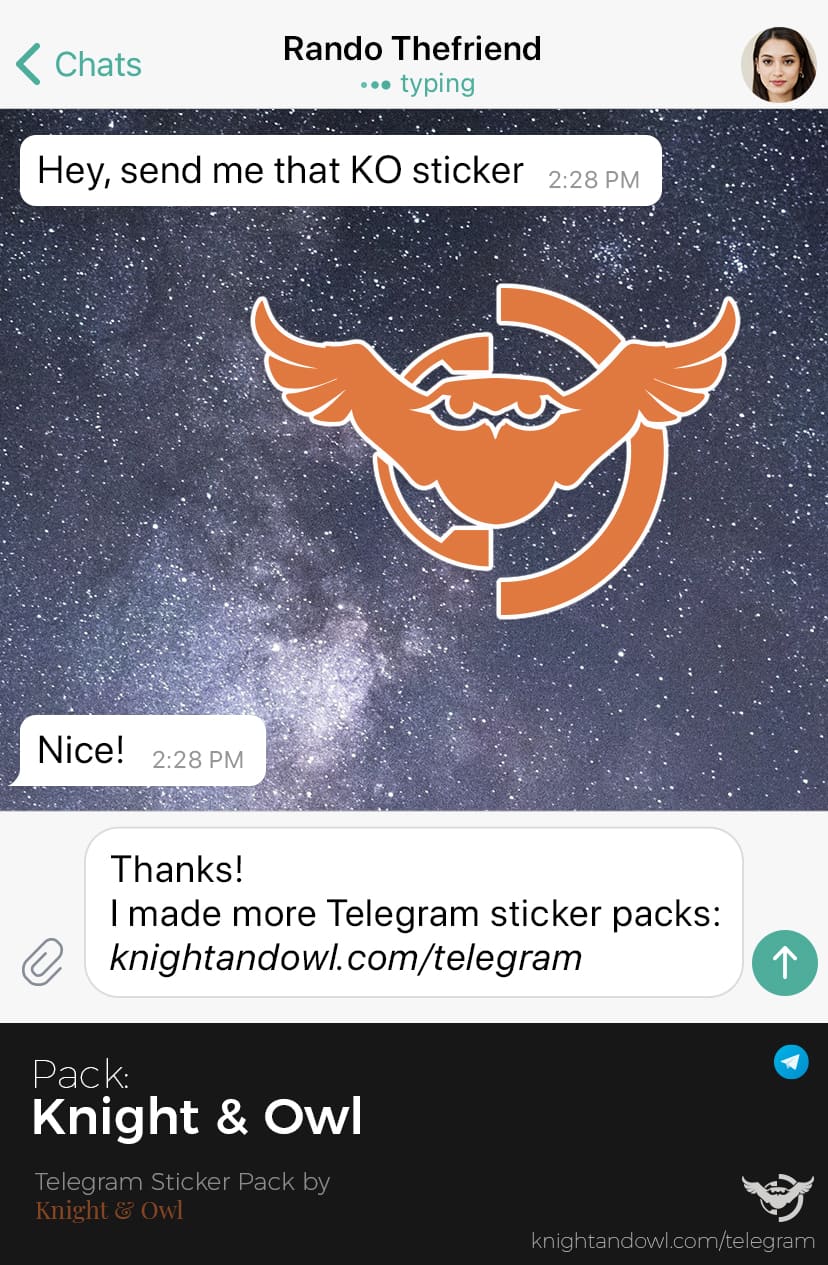 I quickly knocked out a pack that is made of my own logos, because why not, lol! I rarely use this one, to be honest. There’s no practical application for this one, hahaha!

I started out my Telegram sticker pack journey by making these 3 Candy Hearts packs, because they were a quick and easy way to get familiar with how to create a pack. It is really extremely simple, especially when you contrast the Telegram pack creation process with its competition. To develop anything for Apple’s iMessage you need a paid developer account, so right out of the gates you want to charge for your stickers. Facebook Messages and WhatsApp are nowhere near this easy. I won’t be pursuing creating for those platforms.

I couldn’t handle the number of messages I thought would work well on these candies, so I decided they should be broken unto themed packs. Check’em out: 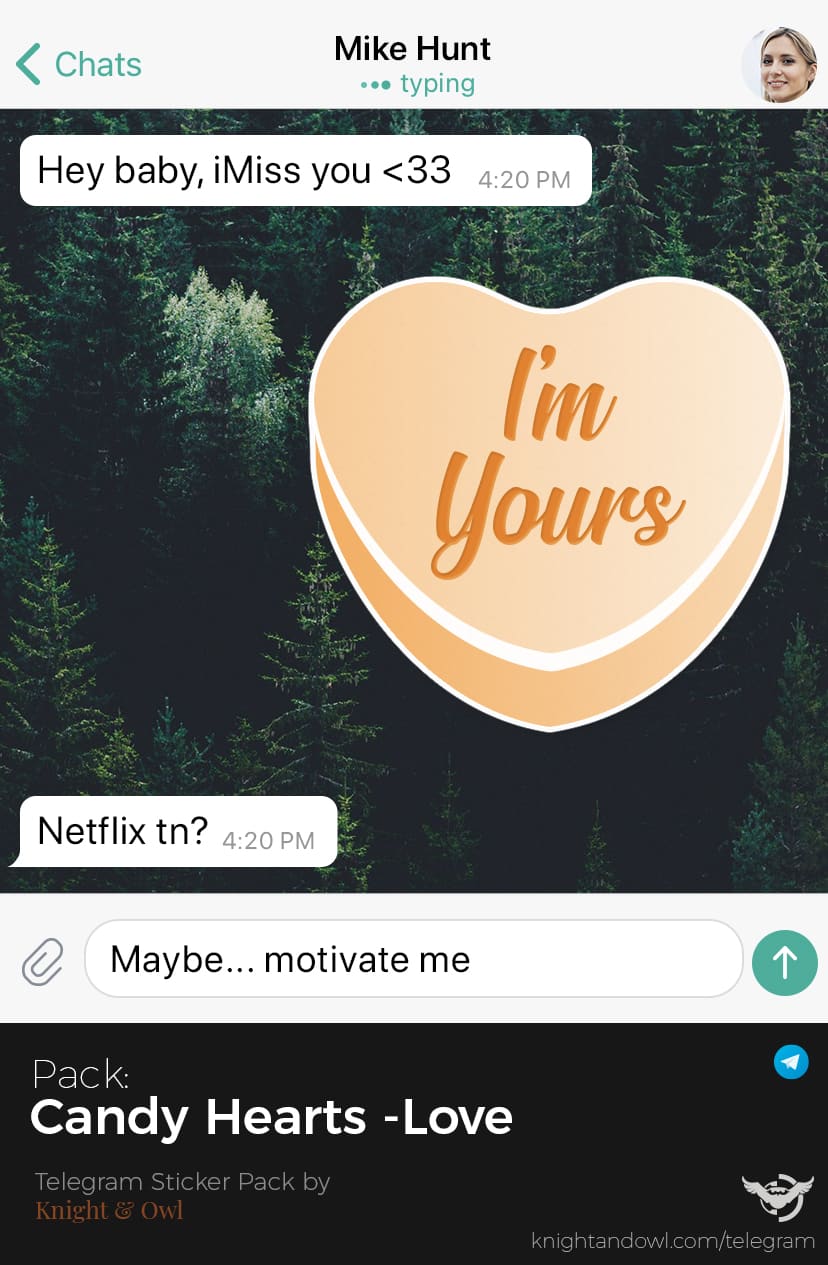 The Love pack was first. I whipped up the drawings in Adobe Illustrator rather easily and spent some time on Google “researching” the messages. In the end, there are probably too many stickers, lol! 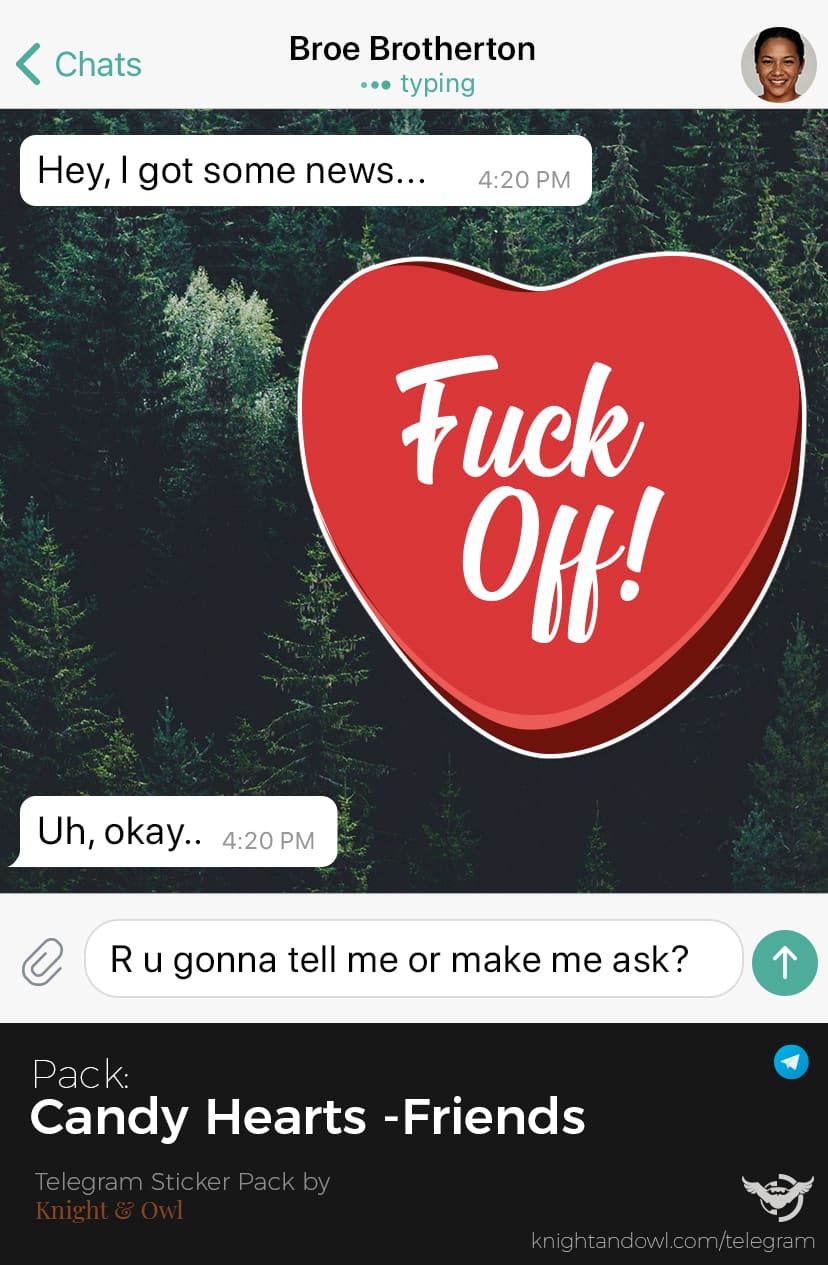 For the Friends pack I experimented with random candy rotations, trying to simulate them being poured out of a candy box. To be honest, I am not all that happy with this pack, but I do have a few favs within it. 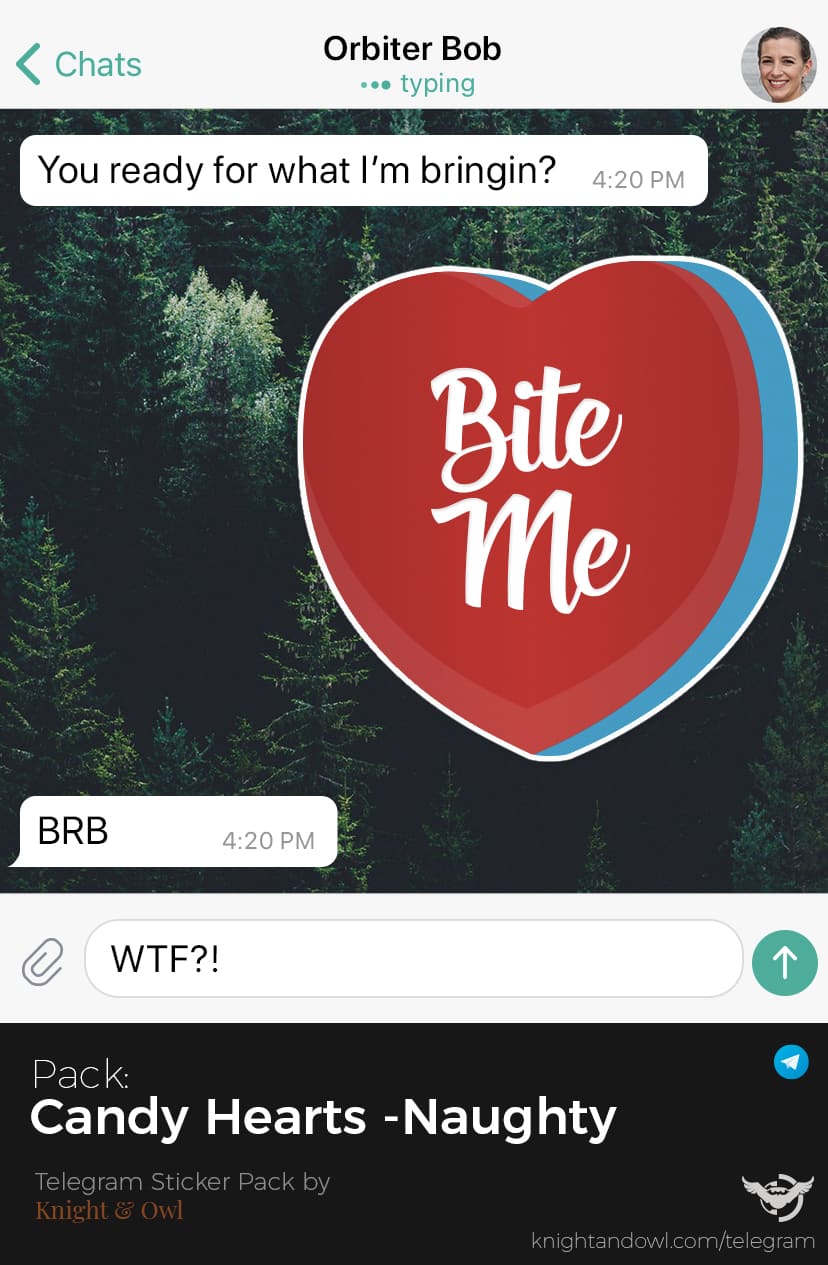 The Naughty pack was fun because there are no barriers when you raise the age limit. There’s an Easter egg in this pack, let me know if you find it!

I would actually love to hear your feedback on these sticker packs. I can be motivated to create new ones as well, whether by commission or passion.

Tell us what you need
hello@knightandowl.com

We learn about you, your business, & your needs.
Then we build…

Our portfolio contains select works. Come take a look and let us know what you think.